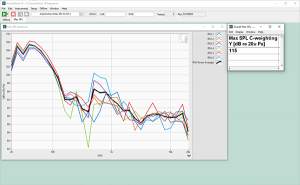 The sequence uses a 6 microphone array mounted at either the driver or passenger locations. A 30 second pink noise stimulus having an RMS level of -12 dBFS is played through the infotainment system and captured by SoundCheck’s Multi-channel Real Time Analyzer (RTA). The Multi-channel RTA produces 6 RTA curves which are then power averaged to produce a Max SPL Spectrum. The spectrum is then power summed to produce a single value for Max SPL. 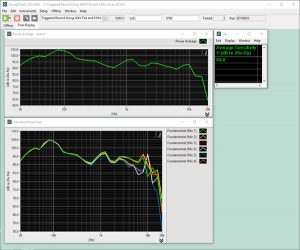