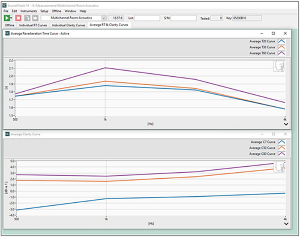 The RT60 room acoustics sequence measures reverberation time and clarity of a room using multiple microphones to accurately characterize measurement environments. This is important for smart device testing as measurements of both speech recognition and audio output often need to be made in fully characterized rooms with known reverberation times and clarity. The method used in this sequence is fast, accurate, and made using fully calibrated signal paths. This sequence uses an omnidirectional speaker to play a Log Sweep from 250Hz – 15kHz and four microphones measure the impulse responses generated. These waveforms are analyzed using the Time Selective Response and room acoustics algorithms to calculate reverberation time (T20, T39, T60) and clarity (C7, C50 and C80) according to ISO 3382-1:2009.
More 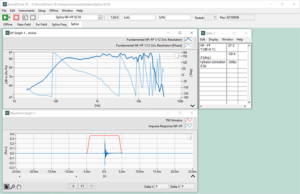 This sequence measures the anechoic response of a loudspeaker in an ordinary room using both a near field and time-windowed far field measurement “spliced” together to cover the full bandwidth of the loudspeaker’s response from 20 Hz to 40 kHz. First, the microphone is placed very close to the low frequency driver (less than an inch from the woofer), and the near field frequency response measured using a 1/12th octave stepped sine). Next, the microphone is placed in the far field and the frequency response is measured using a continuous log sweep with the Time Selective Response analysis algorithm. An option is available for measuring a ported loudspeaker. The sequence displays both measurements on a graph, showing the overlap range where the measurements are equal. From this, the user selects the precise frequency at which to splice the two halves of the measurements together to obtain the full range free field response of the loudspeaker. 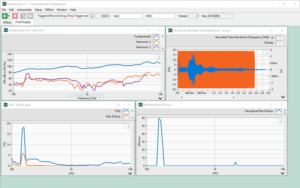 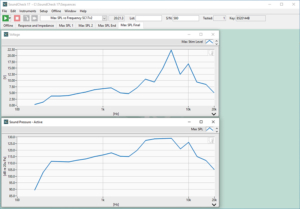 This sequence measures the Max SPL of a transducer versus frequency that a device can play back with acceptable distortion. It is particularly valuable for designers using DSP algorithms to optimize the performance of their speakers.

It characterizes the Max SPL of a transducer by setting limits on specific metrics (THD, Rub & Buzz, Perceptual Rub & Buzz, Input Voltage and Compression) and then driving the transducer at a series of standard ISO frequencies, increasing the stimulus level until the one of the limits is surpassed. The sequence begins by measuring the frequency response and impedance of the DUT. The user is asked if they wish to use the -3dB from resonance frequency as the test Start Frequency or manually enter another value. The user is then prompted to enter a Stop Frequency, initial test level and limit values for the metrics of interest. The sequence then plays the stimulus Start Frequency in a loop, increasing the level +3dB with each loop iteration until one of the limits is exceeded.  The stimulus level is then adjusted -3dB and the sequence continues to a second loop which increases the stimulus level +0.5 dB with each loop iteration until the limit is exceeded. At this point, the limit results are saved to an Excel file, the stimulus frequency is incremented by a constant multiplication step and the process is repeated until the Stop Frequency is achieved. Every time the main loop is completed, the individual SPL and Stimulus Level x-y pairs are concatenated to master curves. At the end of the sequence, the Max SPL and Stimulus Level curves are autosaved in .dat format. 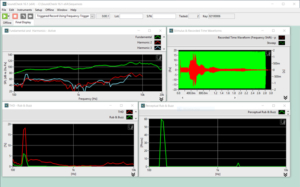 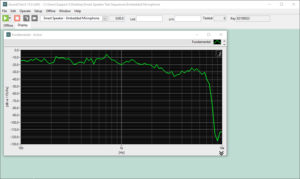 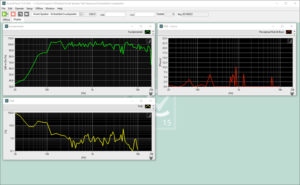 This sequence demonstrates a method by which SoundCheck can measure the performance of a loudspeaker embedded in a so-called “smart speaker”. This example assumes that the DUT is an Amazon Echo but it can be adapted for use with virtually any other type of smart speaker by substituting the Echo’s voice activation phrase audio file (“Alexa, play Test Signal One”) with one specific to the desired make and model.

The sequence begins by playing the voice activation phrase out of a source speaker, prompting the DUT to playback the mp3 stimulus file from the cloud, followed by a pause step to account for any activation latency. Following the pause, a triggered record step is used to capture the playback from the DUT. The Recorded Time Waveform is then frequency shifted prior to analysis and the results (Frequency Response, THD and Perceptual Rub & Buzz) are shown on the final display step.

We recommend reading our AES paper on this subject prior to continuing as it contains additional details on the test methods devised for this sequence. 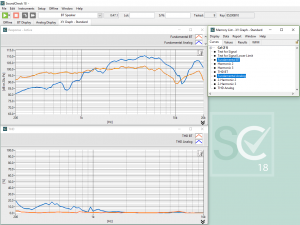 This test sequence performs frequency response and distortion measurements of a Bluetooth speaker using both a wireless Bluetooth and wired stimuli; then compares the results. This sequence is configured for use with a Portland Tool & Die BTC-4149/4148 or BQC-4149/4148 Bluetooth interface. 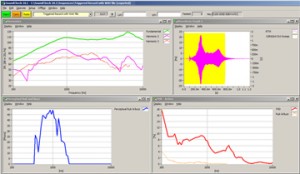 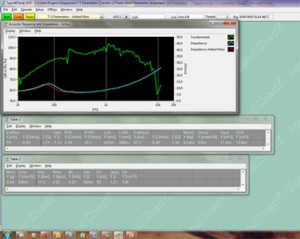 Loudspeaker system performance can be quantitatively related to a set of electro-mechanical parameters. These parameters are known in the industry as Thiele-Small parameters. They were first introduced by A.N.Thiele and Richard H.Small in a series of famous articles published in the 1971-72 Journal of AES (Audio Engineering Society).  Over the years these parameters have become standards in the industry, and are used by loudspeaker designers worldwide. This package contains SoundCheck sequences for measuring measuring Thiele-Small Parameters by Added Mass, Known Volume, Known Driver Mass methods.