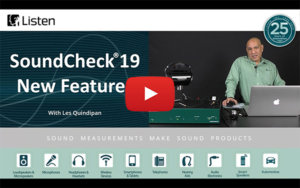 SoundCheck 19 builds on recent releases with additional functionality for multichannel measurements, including the new Multi-channel RTA, WASAPI-exclusive mode and AmpConnect 621 control. The incorporation of room acoustics measurements offers increased capability for those looking to evaluate devices in real-world situations. Many of these features also add value on the production line, minimizing setup time, reducing the opportunity for user-errors and ensuring smoother operation in automated situations.

The single-channel RTA is replaced with a new multi-channel version, which enables viewing of multiple signal paths simultaneously. The ability to display multiple channels or signal paths presents a convenient view of many measurements across a wide range of applications. These include overlaying left and right earphone responses to check for fit and seal, microphone array captures (e.g. in-vehicle cabin measurements), real time adjustment of active noise cancellation filter, and more.
Spectrum settings such as gain, octave band, weighting, averaging and time-weighting can be set independently for each channel for complete measurement flexibility. The new Multi RTA also supports a power averaging calculation on the signal paths which can be used for spatial and sound power measurements. All multi-channel RTA functionality can also be used within a test sequence for automation. It conforms to the ANSI S1.11-2004 Class 0 standard.

Room Acoustics RT60 (part # 2050, requires TSR Module Part # 2006)
The optional RT60 Room Acoustics module enables measurement of the reverberation time (signal decay time) and clarity (ratio of early reverberations to late reverberations) of any room or space. This functionality is useful for quantifying how speaker will interact with the acoustics of a particular type of room. It can also help identify problems with room acoustics so that the floor, ceiling and walls can be treated accordingly. The integration of the RT60 functionality within SoundCheck provides the user the assurance that measurements can be performed with calibrated signal paths.
SoundCheck offers extremely fast measurements using a continuous sine sweep with the Log TSR algorithm to obtain the impulse response. The reverberation decay curve is calculated from the backwards integrated impulse response. Aside from its speed, this method offers other significant advantages over the traditional direct method – it requires just one measurement at each location, and minimizes the effect of noise and distortion on the measurement. 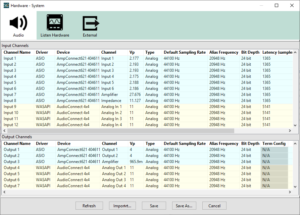 WASAPI Exclusive-Mode
SoundCheck now offers the option to operate in WASAPI-exclusive mode. This advanced interface offers superior communication with audio devices in recent versions of Windows, giving SoundCheck greater control over the audio stream. WASAPI-exclusive mode bypasses the Windows audio engine, sending audio streams directly to the device. This delivers lower latency and ensures that sample rate conversion from the built-in Windows audio engine will not occur. It also enables SoundCheck to put an exclusive lock on the audio interface so that a measurement cannot be disrupted by system sounds. It offers significant advantages for multichannel applications, particularly where the channel count requires multiple audio interfaces. Multiple WASAPI devices may be used simultaneously, whereas ASIO driver restrictions prevent this. It is also possible to combine WASAPI and ASIO devices to increase channel availability.

AmpConnect 621 Control
SoundCheck 19 supports AmpConnect 621, Listen’s new high resolution (up to 192kHz) multichannel audio interface. AmpConnect 621 has no front panel controls; it is exclusively configured via the SoundCheck 19 software. Set-up and configuration is extremely simple and fast with full plug-and-play functionality and TEDS support for automatic identification, configuration and calibration of microphones and accelerometers. Naturally, the absence of front panel knobs also provides an added level of test integrity by ensuring that settings cannot be inadvertently adjusted outside of your test configuration. SoundCheck 19 with AmpConnect 621 is a simple and cost-effective solution for automotive measurements with a 6-microphone array, sound power measurements, or for measuring devices with multiple speakers such as smartphones or sound bars.

Diagnostic Window
The new Diagnostic Window enables the user to suppress warning dialog windows when running a sequence and instead log the errors, warnings, and information in a separate diagnostic window. This is useful when Soundcheck is run in unattended or in highly automated situations (for example, on a production line) where dialog windows would interrupt the execution of a sequence. The error log is easily emailed to the Listen support team to facilitate troubleshooting. The user has full control over what types of errors and warnings are displayed in real time, and which are written to the log. 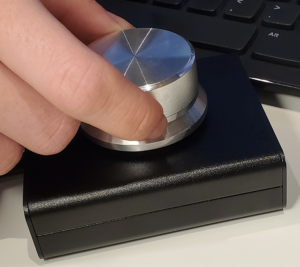 USB Controller Knob Compatibility
SoundCheck now allows use of the Drok USB Controller Knob in both Windows and MacOS to adjust the SoundCheck Signal Generator and simulate the feel of a manual analog signal generator. Used in conjunction with other virtual instruments such as the RTA, spectrum analyzer and distortion meter, this offers a rapid way to identify defects by observing the response while manually fine-tuning the signal generator. The default knob settings can be changed to use keyboard shortcuts built into SoundCheck.