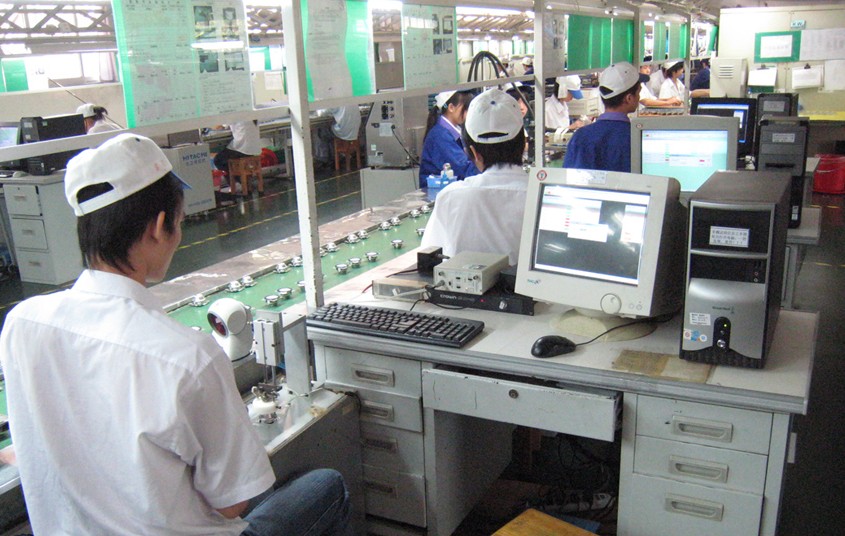 Cost-Effective
A production test system is less expensive than an R&D system, as SoundCheck’s modular pricing structure means you only purchase the capabilities that you need. SoundCheck is easily expanded with additional modules as your test needs change over time, so it is never obsolete! This makes it extremely versatile for contract manufacturers who are producing several different types of audio product.

Simple To Use
With simple automated or one-click operation and clear visual pass/fail signals, SoundCheck is easy to use. Various operator access levels enable the system to be ‘locked’ to avoid accidental modification of tests, and Listen’s newest hardware has no control panels on the device itself, making it impossible for test and device settings to be accidentally changed.

Integrated
SoundCheck is integrated easily with large factory automation systems via TCP/IP. A single computer can control multiple SoundCheck stations within an automated test framework using Python, C#, Visual Basic, LabVIEW, etc. In addition to basic operations, test configuration data can also be passed to/from SoundCheck. This enables test parameters, such as limits, test levels, and test signals, to be stored externally so that a single sequence is used for multiple products. This simplifies test configuration and reduces the number of sequences that a large organization needs to maintain. SoundCheck controls additional hardware or equipment using custom VIs, enabling it to be integrated with any custom test fixtures.

Database Integration
SoundCheck’s powerful database tool handles large volumes of data with high speed and space-efficiency, making it easy to retain complete test data for full traceability. SQL and Python tools are provided to facilitate data extraction so that detailed analysis and graphical representation may be implemented in your Business Intelligence (BI) system of choice (e.g. Tableau, Qlik,etc.). SoundCheck is also fully compatible with WATS, the popular electronics manufacturing intelligence software. This enables production line results to be viewed in real time, anywhere in the world.

Quick Setup
SoundCheck is easy to deploy across multiple test stations. ‘Plug-and-play’ setup and TEDS compatibility minimize configuration time, particularly with multichannel interfaces. Automatic loading of the correct authorization key from a network location enables a single computer image to be created rather than individually configuring  each computer. This makes multiple-station installations simpler and faster resulting in significant time savings for large-scale operations.

Integration with R&D
Production line SoundCheck systems are fully compatible with R&D SoundCheck systems. While the system costs and capabilities may differ, test sequences, results and WAV files are easily transferred from one to the other. This means that production lines can use the same tests as the R&D lab – test sequences can easily be sent to production, and any results that need further investigation can be emailed back to the labs for additional analysis.