Listen’s (Cepstral Loudness Enhanced Algorithm for Rub & Buzz) algorithm offers true perceptual Rub & Buzz analysis for production line applications. It uses a simplified auditory perceptual model to measure the loudness of Rub & Buzz distortion in phons rather than the more traditional dB SPL and % distortion units. These better identify whether distortion due to manufacturing defects can be heard by the listener than conventional measurements. In addition to a result which corresponds more accurately to the human ear, this new test method also offers two significant advantages for use on the production line. It is less sensitive to transient background noises than traditional methods, therefore is reliable in noisy environments, and it is much simpler to set limits than when using conventional distortion measurements. 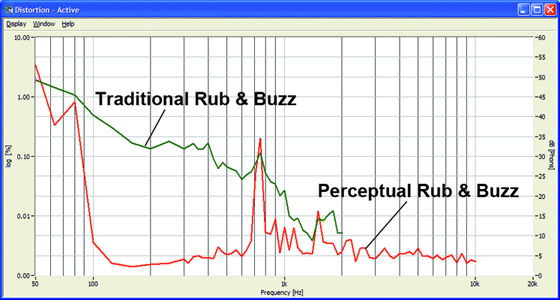 Conventional Rub & Buzz detection has been widely used on the production line since Listen introduced it in SoundCheck Version 1 back in 1996. It offers excellent identification of Rub and Buzz defects caused by manufacturing problems, and will continue to do so. In recent years, some manufacturers have moved to a defect detection model where they prefer only speakers with audible faults to fail QC checks. This is because if only speakers with audible faults rather than any faults are rejected then yields are higher. Perceptual Rub & Buzz offers a means of identifying and precisely quantifying this with all the benefits and reliability of an automated test system.

Unlike other Perceptual Rub & Buzz detection systems that simply claim ‘unmatched correlation’ based on ‘patented technology’, Listen’s Perceptual Rub & Buzz distortion measurement is based on well-proven psychoacoustic principles. It accurately replicates the human ear using mathematical models found in MP3 encoders that mimic the way that both the ear and the brain interpret sound. Since these methods are so well established and documented, we are confident being open with our users about our test methodology. The flow chart below offers a simplified representation of the CLEAR™ algorithm. 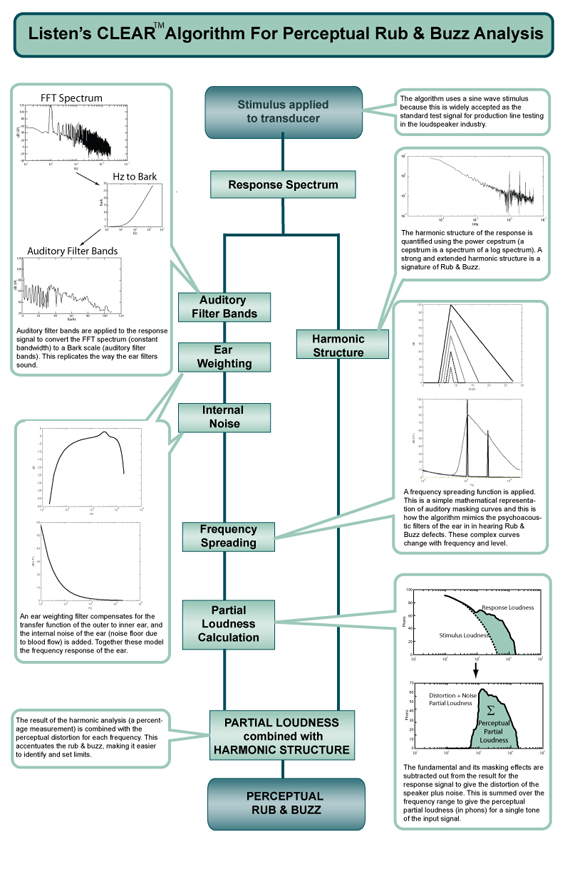