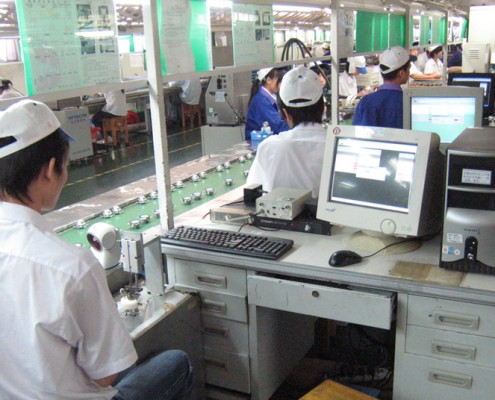 From its inception, SoundCheck has been designed to be equally at home on the production line as in the R&D lab, and integration with your laboratory procedures and production automation is at the forefront of our product philosophy.

Production
On the production line, SoundCheck’s test sequences integrate fully with factory automation systems, making it easy to run SoundCheck tests as part of a larger automated test framework controlled with Python, C#, Visual Basic, LabVIEW, etc. In addition to opening and running test sequences, users can also pass test configuration data into SoundCheck from external programs using TCP/IP commands. This enables parameters such as limits, test levels, and test signals to be stored externally so that a single sequence can be used for multiple products. This minimizes the number of sequences that a large organization needs to maintain and reduces test configuration time. SoundCheck’s powerful database tool handles large volumes of data with high speed and space-efficiency, making it easy to retain complete test data for full traceability. SQL and Python tools are provided to facilitate data extraction so that detailed analysis and graphical representation may be implemented in your Business Intelligence (BI) system of choice (e.g. Tableau, Qlik,etc.). SoundCheck is also fully compatible with WATS, the popular electronics manufacturing intelligence software. This enables production line results to be viewed in real time, anywhere in the world.

R&D
In the R&D lab, data is easily imported into SoundCheck for easy comparison between systems. Results are simply loaded as a CSV file where they can be displayed on graphs, used as limits, undergo additional analyses, and more. The Soundmap time-frequency analysis module imports MLSSA TIM files as well as other raw data types. On the export side, SoundCheck can export to Matlab for additional mathematical analysis. All SoundCheck data, graphs, calculations, etc. can be output to preformatted Word or Excel reports or saved to a database.

Collaboration
Collaboration between R&D and production is simple. R&D tests can be modified for high volume production line applications, for example, by adding limits and substituting a simple pass/fail result for a detailed failure analysis. Sequences can be emailed from one system to another, as can data such as limits, WAV files etc. For production line troubleshooting, files and waveforms can be emailed and imported into an R&D system for additional or more detailed analysis.