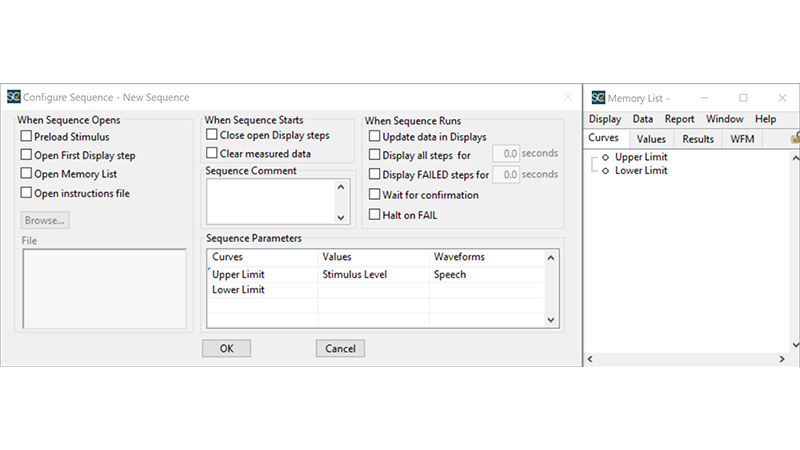 SoundCheck 18’s new features focus on automation and simplicity. Automation features include the ability to pass test configuration data to and from external programs, and control of MEMS interfaces via a sequence. Setup and test development is simplified with ‘plug and play’ functionality for Listen hardware, simplified gain control, and improved sampling rate management.

Soundcheck’s new sequence parameter feature allows the user to pass test configuration data into the memory list from external programs using TCP/IP commands. By externally storing parameters such as limits, test levels, and test signals, a single sequence can be used for multiple products, simplifying the number of sequences that a large organization needs to maintain, and reducing test configuration time.

It is also useful for applications where a sequence needs to be run many times with different parameters, for example, testing voice recognition with a range of voices or test levels. This functionality is particularly useful where SoundCheck tests are run as part of a larger automated test framework controlled using Python, C#, Visual Basic, LabVIEW, etc.

Reduced Set Up Time with Plug and Play Listen Hardware 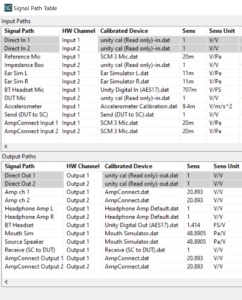 Improved hardware setup enables you to plug in and make measurements faster. Listen and Portland Tool & Die Hardware are now true ‘plug-and-play’ which minimizes configuration time, particularly with multichannel interfaces. Simply connect your AmpConnect, BTC-4149 or other Listen interface via the USB cable and the software auto-populates parameters such as sampling rate and calibration values, and creates input and output signal paths.Multiple hardware items are stored within the software, so that they are immediately recognized when connected, and the software will automatically default to the correct device.When substituting devices of the same type, SoundCheck will re-use the configuration previously set up, either manually or during a sequence, so that signal paths and sequence configurations do not need to be updated. This makes deploying a sequence over multiple stations simpler and faster and will offer significant time-savings for large-scale operations who need to configure multiple stations or move hardware around between stations.

Auto read and auto range gain settings are now easily accessible as drop-down options in the gain menu in the acquisition step editor, and auto-read is available in virtual instruments. Setting the gain to auto-read, means that SoundCheck will automatically adjust the gain based on manual input from the user, making it much faster to make quick gain adjustments while developing sequences. When the gain is set to auto range, SoundCheck will automatically identify the correct level of gain to optimize the measurement signal to noise ratio. This makes it fast and simple to optimize tests in the R&D lab for the correct gain before transferring them to production. 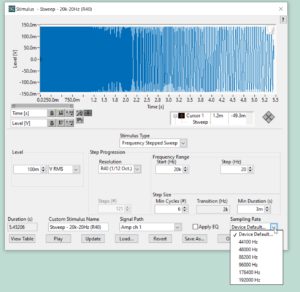 WAV file. This makes it simpler to switch between WAV files, and is useful for anyone making measurements with wave file signals such as speech or music.

New Digital I/O Control
Digital I/O control is now a separate message step. This means that all controls for I/O settings are completely separate from other AmpConnect settings, minimizing the possibility of other parameters such as gain or routing being accidentally modified. The new settings offer a uniform appearance and switching scheme across all devices with digital I/O control, so that sequences written, for example, with NI hardware, are easily converted to work with AmpConnect.

MEMS Interface control
The Portland Tool & Die MEMS microphone interfaces can now be fully controlled from within SoundCheck. This offers faster setup of the measurement interfaces with SoundCheck as well as greater measurement reliability as the device settings can be built into the test sequence. Sequences using the R&D grade DCC-1448 interface will also work seamlessly with the production-gra 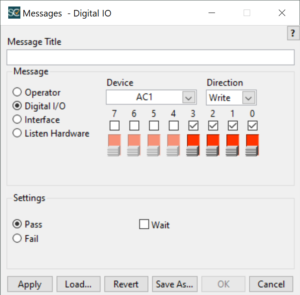 de PQC-3048, making it much simpler to transition sequences from the R&D lab to the production line.

SoundCheck’s modular nature allows customization for the perfect balance of capabilities and price. Typically, one of the following base packages is selected and additional modules added as needed.

Soundcheck Basic (part #1000)
Created with cost-sensitive production customers in mind, SoundCheck Basic performs simple sine-based measurements such as frequency response, sensitivity, and harmonic distortion. It does not include the sequence editor, so an additional system with a higher package is required to generate test sequences, or the sequence editor module should be added.

SoundCheck Plus (part #1102)
SoundCheck Plus is the most common starting point for customers measuring simple transducers. In addition to the SoundCheck Basic modules the Plus package includes the Sequence Editor and the Signal Generator, Multimeter, and Scope-FFT virtual instrument modules.

SoundCheck Advanced (part #1103)
SoundCheck Advanced is a powerful tool for R&D testing with additional modules including the Real Time Analyzer virtual instrument, Time Selective Response (for performing simulated free field measurements), Polar Plot, and the Equation Editor, as well as everything in the Plus package. Customers wanting to measure Thiele-Small parameters should select this package.

SoundCheck Complete (part #1111)
SoundCheck Complete offers the most comprehensive set of audio testing tools available. It includes nearly all the available modules for SoundCheck incorporating everything from the Advanced package plus additional analyses such as IM Distortion, Multi-tone, Transfer Functions, and Perceptual Rub & Buzz. It also includes the powerful post processing options Zwicker Loudness and the Waveform Filter.

SoundCheck ONE (with AmpConnect: part #1006; with AudioConnect: part #1007)
SoundCheck ONE is a simple, low-cost version of the SoundCheck software, designed for production testing of loudspeakers, microphones, and headphones. Designed to work seamlessly with the AmpConnect or AudioConnect hardware, SoundCheck ONE is quick to setup and easy to use. Tests are created from a series of basic templates, within which settings such as stimulus range and level, limits, and display preferences are customized. These custom sequences can then be saved for each product tested.