A test sequence that performs two of the measurements from the ANSI hearing aid test standard S3.22-1996. 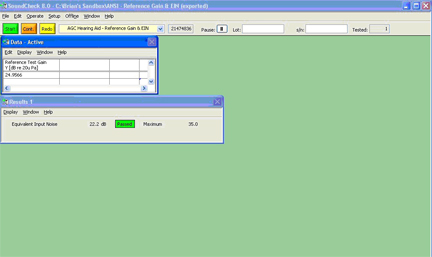 This sequence performs two of the measurements from the ANSI hearing aid test standard S3.22-1996. The first part, in accordance with section 6.7 of the standard, helps the user set the reference test gain for the hearing aid, which is used for multiple measurements in the standard. The second part, from section 6.12, tests the equivalent input noise (EIN) of the device. While there are multiple ways to approach these measurements, this sequence demonstrates an efficient process using SoundCheck’s WAV file equalization module and the virtual instruments.

SoundCheck® module 2013, WAV File Equalization, allows the user to apply calibrated equalization curves to any WAV file in a sequence. This particular sequence makes use of a custom three tone stimulus (1000, 1600, and 2500 Hz) to measure the high frequency average (HFA) at various levels.

The sequence begins by instructing the user to set the gain of the hearing aid to maximum. The equalized HFA WAV file is played at 90 dBSPL through the anechoic box speaker, and the output of the hearing aid is measured through an ear simulator using the multimeter. This value is the HFA OSPL90 (high frequency average, output sound pressure level of 90 dB).

The ANSI standard specifies that the reference gain of the hearing aid be set such that the HFA measured from a 60 dBSPL source be 17 dB (+/- 1 dB) less than the HFA measured from a 90 dBSPL source. To establish the target level the sequence takes the HFA OSPL90 and subtracts 18 and 16 dB. The resulting values serve as limits for the next measurement. Now the HFA file is played at a level of 60 dBSPL continuously and the multimeter remains open. This allows the user to adjust the gain on the hearing aid until the output level falls between the limits. The user may wish to manually adjust the multimeter scale to make it easier to read.

Section 6.12 of the ANSI standard defines Equivalent Input Noise for AGC hearing aids with the following equation: Ln = L2 – (Lav – 50 dB)
Ln is the EIN, L2 is the measured noise, and Lav is the HFA level at 50 dBSPL. Essentially the standard specifies to measure the noise and then subtract the gain of the device under test. To accomplish this, the sequence first measures the HFA OSPL50 using the aforementioned WAV file and the multimeter. Next, the source is silenced, and a measurement of just noise is taken with the multimeter. A series of post processing steps perform the arithmetic from the above equation, and the resulting Ln value (EIN) is given in dBSPL. 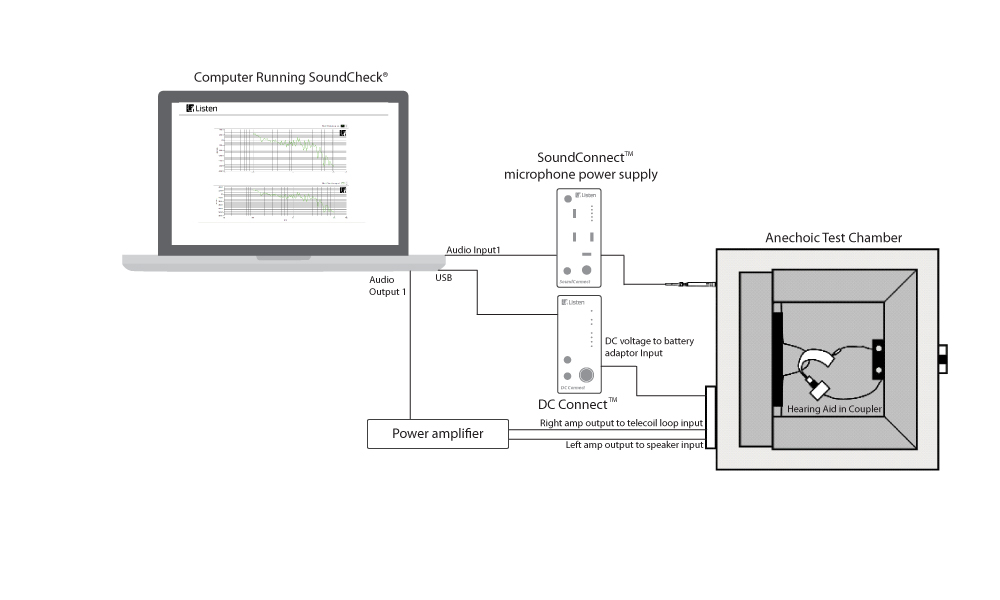 Ways in which you could modify or further develop the sequence include: