SoundCheck sequences for the electro-acoustic tests detailed in Section 8 “Characteristics to be specified and their method of measurement” of IEC-60268-7: Sound System Equipment – Part 7: Headphones and Earphones 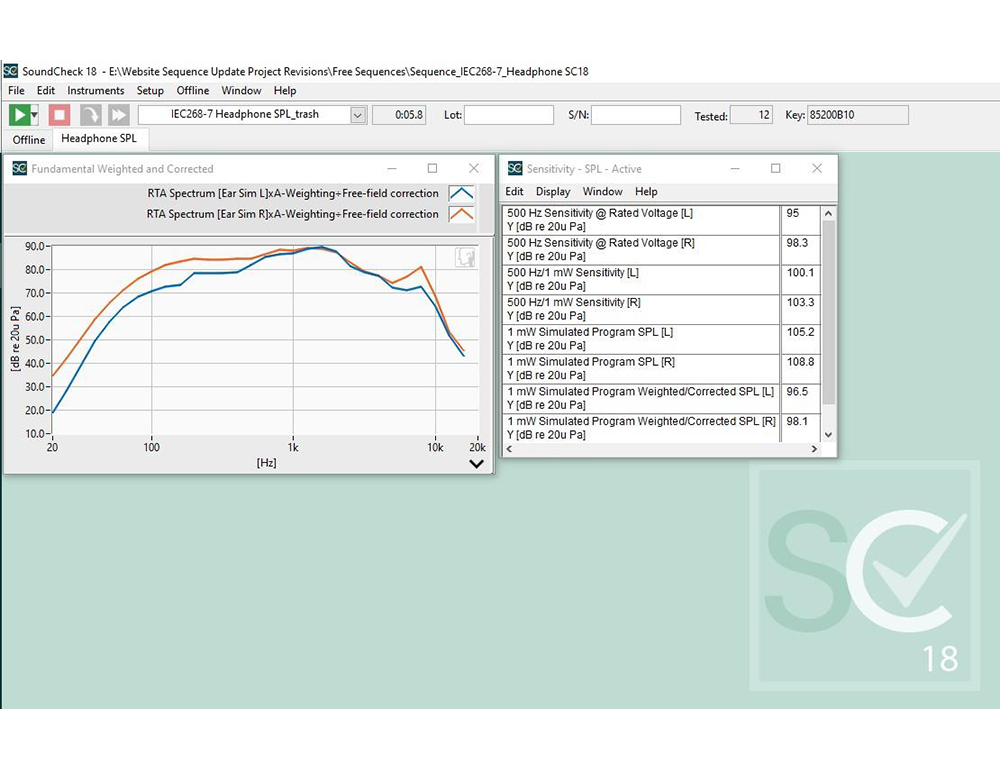 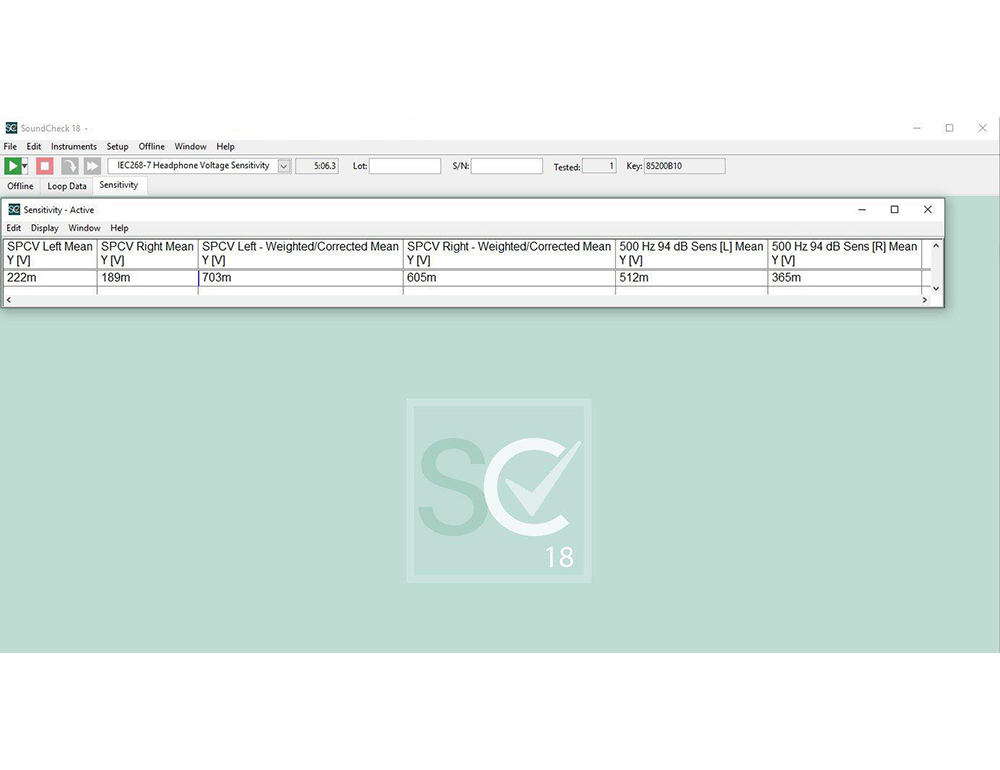 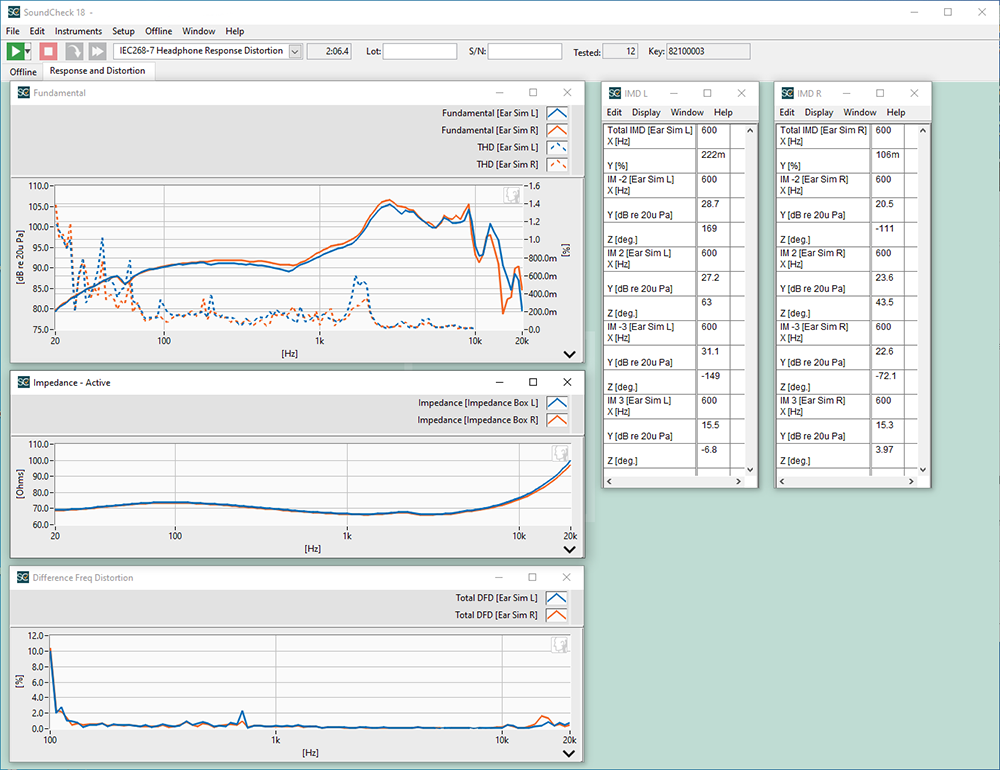 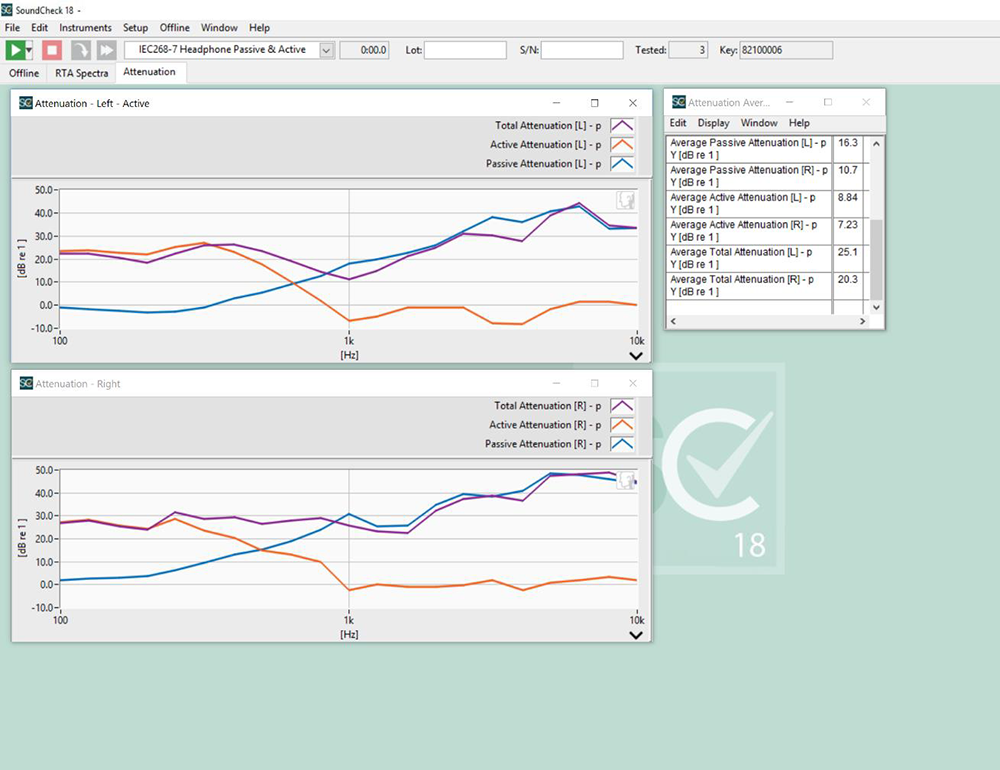 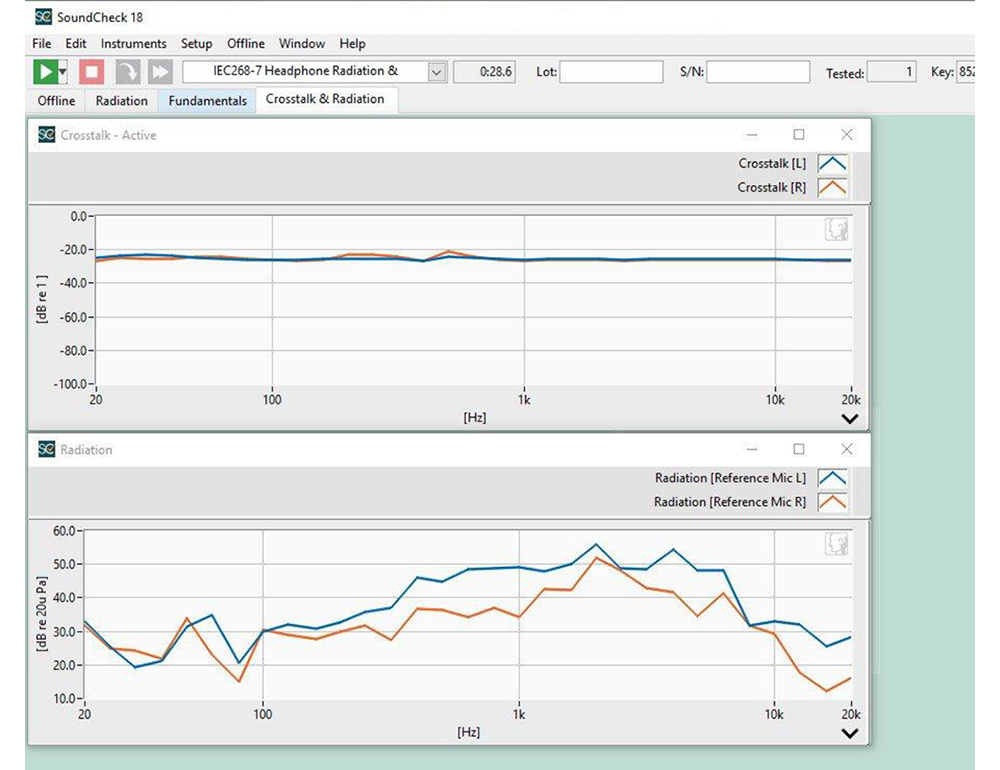 To run these sequences, the following hardware is required.

* The Listen SoundConnect 2 microphone power supply can be used as an input switching device, switching between Line and microphone inputs.

It is recommended that the sequences be run directly from the IEC-60268-7 folder. The folder contains dependent files required to run the sequences.

Before attempting to run any of the sequences, read the following setup instructions. 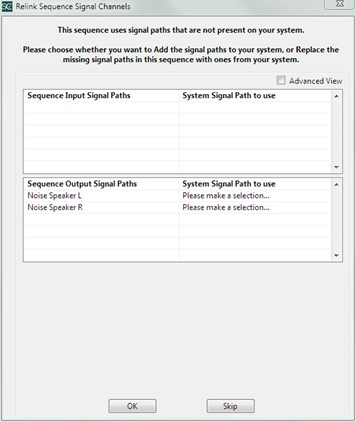 Here is a list of sequences and their default signal paths (unique paths are in bold):

* Reference Mic and Impedance Box can share the same hardware inputs as they are not used together in the same sequence. If more than 4 input channels are available, all input signal paths may be assigned to separate hardware channels.

Detailed setup and calibration instructions are included in the following Sequence Notes.

This sequence satisfies the requirements of Section 8.5 Sound Pressure (Level). Using the DUT’s rated voltage and impedance values, the sequence measures the left/right 500 Hz SPL at the rated voltage level and at 1 mW. It also uses a Simulated Program Source (SPS) stimulus (pink noise, 20 Hz-20 kHz, shaped according to IEC 60268-1) to measure the 1 mW SPL of the DUT’s unfiltered output spectrum and the weighted (A weighting) and corrected (free field correction) output spectrum.

The sequence prompts the operator to enter the rated voltage and rated impedance of the DUT. It then calculates the voltage required to produce 1 mW into the rated impedance. Play and Record Acquisition steps then capture the L/R response of a 500 Hz tone played at the rated voltage and at 1 mW. A subsequent Play and Record step captures the L/R response of the 1 mW Simulated Program Source.

The 500 Hz recorded time waveforms are processed using heterodyne analysis to derive their fundamental values. The recorded time waveforms of the SPS response are then processed using RTA Spectrum Analysis (1/3 octave resolution) and the resulting spectra are A weighted and free field corrected. The spectra are then power summed to derive a single SPL value and the 500 Hz fundamentals are post processed to derive their SPL values.

This sequence satisfies the requirements of Section 8.3 Input Voltage. The sequence uses a Simulated Program Source (SPS) stimulus (pink noise, 20 Hz-20 kHz, shaped according to IEC 60268-1) and a 500 Hz sine to determine the DUT’s voltage sensitivity. The sequence calculates the SPCV (Simulated Program Characteristic Voltage, e.g. voltage required to produce 94 dBSPL) for the unfiltered SPS response and the A weighted/free-field corrected response as well as the 500 Hz 94 dB voltage sensitivity.

The sequence first recalls the SPS WAV file, free field correction and A weighting curves into the memory list. It then enters a loop which will run 5 times. First, two signal generators and two multimeters open and the user is prompted to adjust the DUT position on the HATS to produce maximum level on the L & R HATS Ears. The sequence then plays and records the DUT’s response to a 500 Hz 50 mV stimulus. Next, two Signal Generators and two RTA virtual instruments will open. The signal generators play the SPS and the RTA spectrum of the response is saved to the Memory List. A series of post-processing steps follow to apply the weighting and correction curves, calculate the LAEQ and then the Simulated Program Characteristic Voltage is calculated along with the 500 Hz voltage sensitivity. Finally, a Statistics step calculates the running mean of the SPCV and 500 Hz values. The data from each loop iteration is displayed as it is acquired. After 5 loop iterations, the mean values for SPCV, SPCV weighted/corrected and 500 Hz sensitivity are displayed in a table.

This sequence satisfies the requirements of Section 8.2 Electrical Impedance, Section 8.6 Frequency Response and Section 8.7 Amplitude Non-linearity. The sequence uses a stepped sine stimulus to measure frequency response, THD and impedance, a composite signal of 70 Hz and 600 Hz with an amplitude ratio of 4:1 to measure intermodulation (IM) distortion and two sinusoidal signals, separated in frequency by 80 Hz to measure difference frequency distortion.

The user is first prompted to enter the rated voltage. This value is converted to dBV and used to calculate the IM and difference frequency stimulus levels. The sequence then runs through a series of Play and Record and Analysis steps to calculate the Frequency Response, Impedance, IM distortion and Difference Frequency Distortion of the DUT which are then shown on the final display.

Section 8.11 Sound Attenuation references the ISO 4869-1 standard which uses human listeners and subjective “threshold of hearing” metrics to determine attenuation values. We encourage interested users to obtain a copy of ISO 4869 but in its place we offer an updated version of Listen’s ANC Headphone Test Sequence. This sequence uses a pink noise stimulus to characterize the passive, active and total attenuation of noise cancelling headphones. It can also be used to characterize the passive attenuation only of a standard (non-ANC) headphone.

This sequence satisfies the requirements of Section 8.10 Unwanted Sound Radiation. The sequence uses a stepped sine stimulus to measure the sound radiation from the DUT as well as the DUT’s crosstalk (e.g. signal level at the HATS R ear of a stimulus played from the DUT’s L output.

The sequence first plays a stepped sine through both channels of the DUT and captures the sound radiation from the DUT using 2 reference mics. Heterodyne analysis is used to calculate the fundamental of the L & R radiation. The sequence then goes through a series of acquisition steps to generate four fundamental curves which are then post-processed to calculate crosstalk. Crosstalk and radiation curves are then shown on the final display.