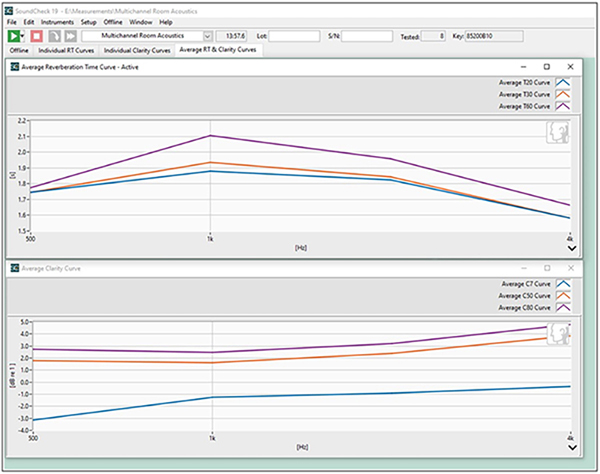 This sequence measures reverberation time and clarity of a room using multiple microphones to accurately characterize measurement environments. This is important for smart device testing as measurements of both speech recognition and audio output often need to be made in fully characterized rooms with known reverberation times and clarity. The method used in this sequence is fast, accurate, and made using fully calibrated signal paths.

Reverberation time is the time taken for a sound to decrease from first onset to inaudibility. Clarity represents the decibel ratio of the sound energy in a short period at the beginning of an acoustical event to the overall energy in the event. Clarity can simply be understood as the absence of too much smearing of sounds together. The SoundCheck room acoustics module makes it easy to generate reverberation time and clarity measurements
including T20, T30, T60 and C7, C50, C80.

A Log Sweep from 250Hz – 15kHz is played through an omni-directional source in the room under test and four microphones measure the impulse responses generated. These waveforms are analyzed using the Time Selective Response and room acoustics algorithm. The room acoustics analysis is configured for 1/1 octave resolution. Rules regarding the setup of the stimulus and the output of the room acoustics module can be found in the manual. Results are shown on separate display tabs for the individual microphone locations as well as the average for the room. Room acoustics values are calculated using the integrated impulse response method according to ISO 3382-1:2009; further details about the measurement technique are included in the SoundCheck
manual. 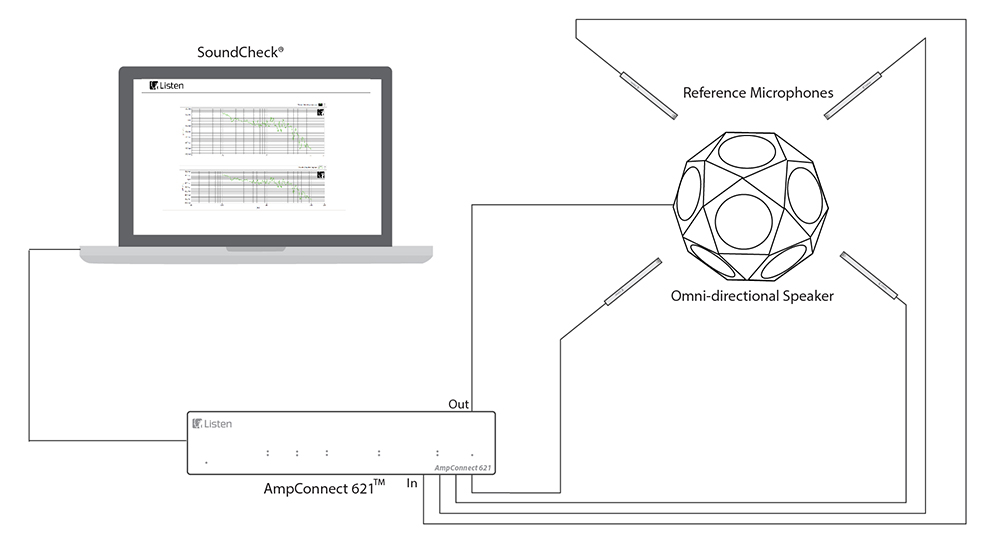 Note: There is an AmpConnect 621 message step at the beginning of the sequence that is used to configure the first 4 inputs for use with SCMs and enable audio output from the first BNC output. This can be removed if you are using a different interface.