With over 100 combined years of audio measurement experience, our team has created a wealth of technical papers, sequences, articles and other useful information to assist you with your audio test needs. Please browse the collection below, or filter by type of resource. 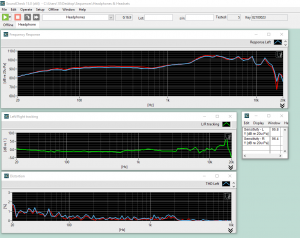 The purpose of this sequence is to test a stereo headphone. Both left and right earphones are measured simultaneously using a standard 1/12th Octave stepped-sine sweep from 20 Hz to 20 kHz. 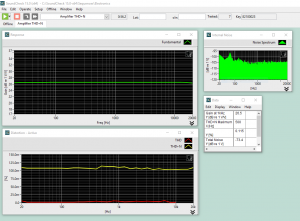 This sequence measures an audio amplifier’s Frequency Response, Gain, THD, THD+Noise, and Self-noise. It accomplishes this by playing a 1/3rd octave sine sweep through the amplifier. A HarmonicTrak™ analysis step calculates the fundamental frequency response curve as well as the distortion plots. The sequence then records and analyzes a spectrum of the amplifier’s self-noise. 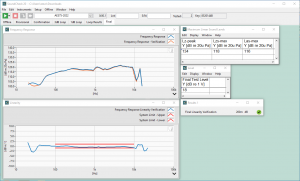 The AES75-2022 standard details a procedure for measuring maximum linear sound levels of a loudspeaker system or driver using a test signal called M-Noise. This is a complex procedure with many repetitive steps, which makes it time consuming to implement manually. This sequence automates the entire process, accelerating test time, minimizing operator intervention, and ensuring accurate and objective test results. 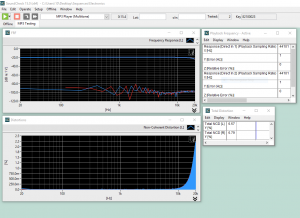 The principle is first to create a multitone stimulus waveform with SoundCheck and transfer it to the MP3 Player to be tested. This waveform is then played back, to be acquired and analyzed by SoundCheck. Both Left and Right channels are acquired at once. The acquisition is made easy by using a trigger on one input channel. The analysis is done by comparing the genuine stimulus and the play-back, using a cross-spectrum technique that provides the FRF, Cross-talk and Non-Coherent Distortion. The cross-talk between channels is measured by playing simultaneously two different multitones for Left and Right channels with interleaved frequencies, and making a cross-analysis between channels (e.g. finding in the right response the contribution of the left stimulus).

Due to inaccuracies of clock frequency, the play-back sampling rate is often different from the Soundcard recording sampling rate. Therefore, in SoundCheck, the recorded time Waveforms are frequency shifted as to obtain a perfect match between stimulus and responses. This frequency correction is performed on both channels before the Analysis steps. The exact playback sampling rate is displayed. The Sequence can be measure the MP3 player on the WAV or the MP3 file playback. The MP3 playback will yield a poorer FRF and more distortion, due to the lossy compression. 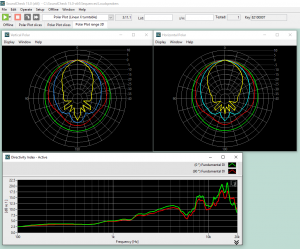 This sequence measures the polar response of a loudspeaker in both the vertical and horizontal dimensions. It is designed to work with the Linear X turntable, and has all the necessary commands to automatically rotate it via RS-232. The sequence uses a log sweep stimulus with the Time Selective Response algorithm so that the measurements can be run in a non-anechoic environment. Note that the time window needs to be adapted to the user’s measurement space. The sequence plays the stimulus and measures at 10 degree increments from 0 to 180 degrees. This process is repeated with the speaker positioned horizontally. The two results are mirrored to display full 360 degree polar plots for each axis. A directivity index curve is also calculated for each axis and is displayed at the end of the test. 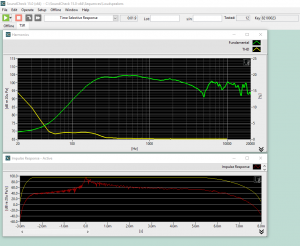 This sequence demonstrates the capabilities of the TSR (Time Selective Response) algorithm in SoundCheck. Using TSR with a log sweep is a very fast and effective method for measuring frequency response and THD of a speaker in a non-anechoic environment. This example plays a quick log sweep from 20 Hz to 20 kHz. An analysis step then uses the TSR algorithm with time windowing to output frequency response, harmonics, THD, and impulse response curves. 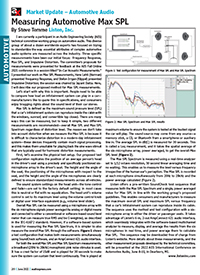 In this short article, Steve Temme introduces the efforts of the Audio Engineering Society (AES) technical committee working on automotive audio to standardize the way essential attributes of complex automotive
audio systems are measured across the industry. He explains why Max SPL measurements are important, defines this measurement, and describes the standardized measurement procedure suggested by the committee. Test configuration and physical setup is discussed, and example results presented. 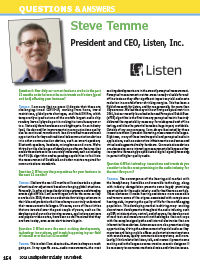 Want to get to know Listen Founder and President, Steve Temme, a little better? Each year, Loudspeaker Industry Sourcebook features interviews with industry leaders in which they ask their opinions on current events, issues and trends in the audio industry. Read what Steve Temme had to say.
Full Article