Harmonic Distortion Measurement: The effects of sampling rate and stimulus frequency on the measured harmonic frequency (including THD and Rub & Buzz)

Harmonic distortion measurements can be confusing to interpret, and it’s important to understand the data that you are looking at, particularly the relationship between the stimulus frequency and the measured harmonic frequency. This brief guide explains the relationships between sampling rate, stimulus frequency and measured harmonics for both normalized and conventional harmonic distortion measurements. 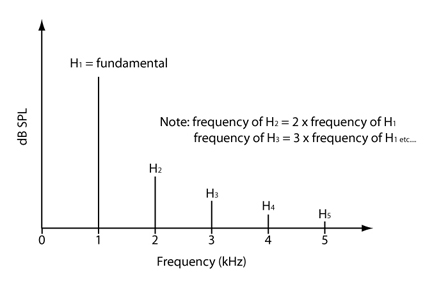 Fig. 1: The relationship between the fundamental and its harmonics for a stimulus at 1kHz

Conventional distortion curves are plotted under the corresponding excitation frequency of the measured fundamental. For example, if the fundamental is 1kHz, the second harmonic at 2kHz is compared in level to the fundamental at 1kHz and plotted at 1kHz.

2.1 is a default set in SoundCheck and ensures that you are operating in the linear range of the anti-alias filter.

For example, with a sound card set to 48kHz sampling rate, the alias frequency is 22,800Hz, so the maximum measurable frequency for the 2nd harmonic is 11,400Hz (7600Hz for the 3rd harmonic, 5700Hz for the 4th and 4560Hz for the 5th). Any total distortion measurements will only include the harmonic distortion products that can be measured up to that frequency. For example, using the sound card above, if you are calculating distortion using the 2nd through 5th harmonics by sweeping to 20kHz, the total harmonic distortion calculated at 5kHz will include the 2nd through 4th harmonics but not the 5th. Below 4.56kHz it will include all selected distortion products.

There are only two ways that you can practically change this to increase your maximum measured frequency:

Normalized harmonic distortion is calculated using the harmonics at the actual measured frequency of their signals using the equation below:

The maximum frequency of a harmonic distortion product is determined by the ratio of the stimulus frequency and the harmonic order being measured. Specifically:

When making THD measurements, it is usually good enough to measure the 2nd through 5th harmonics, because the higher level harmonics will be insignificant in level compared to the lower harmonics (see fig. 1). Sweeping to 20kHz means that all distortion components would be included up to 4kHz, and above that the higher order harmonics become dropped.

Rub and Buzz measurements are usually made using higher order harmonics, often 10th-15th order. This effectively makes the range where all components are included quite small, and it’s important to be aware when interpreting results that at frequencies above 1kHz you start to lose distortion components.

For a detailed explanation of how distortion measurements are graphed, please see Steve Temme’s paper entitled How to Graph Distortion Measurements.

Note: Remember that the frequency range of your microphone or transducer may also limit your measured harmonics. If measurements of higher order harmonics over a large frequency range are important, you need to ensure that all components in your setup will support this.