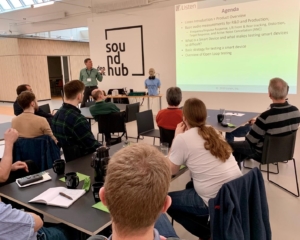 Today, Steve Temme presented on how to measure voice activated devices such as smart speakers, hearables and automotive audio, as well as how to use SoundCheck for basic audio measurements at Sound Hub Denmark, the world’s leading audio innovation hub and co-working space.In the morning, he presented the basics of SoundCheck, and taught attendees (many of whom had access to the SoundCheck system at Sound Hub) how to build a test sequence in SoundCheck. recommendations for the equipment used. After lunch, he explained in depth how to test voice activated devices such as automotive infotainment systems, hearables, and smart speakers. These devices are complex to test as they have numerous wired and wireless connections and often contain signal processing, both on the record and the playback side. In this session, he outlined the test configurations, tools and techniques that enable accurate measurement of the audio performance of such devices under the many various real-world conditions in which they are used.