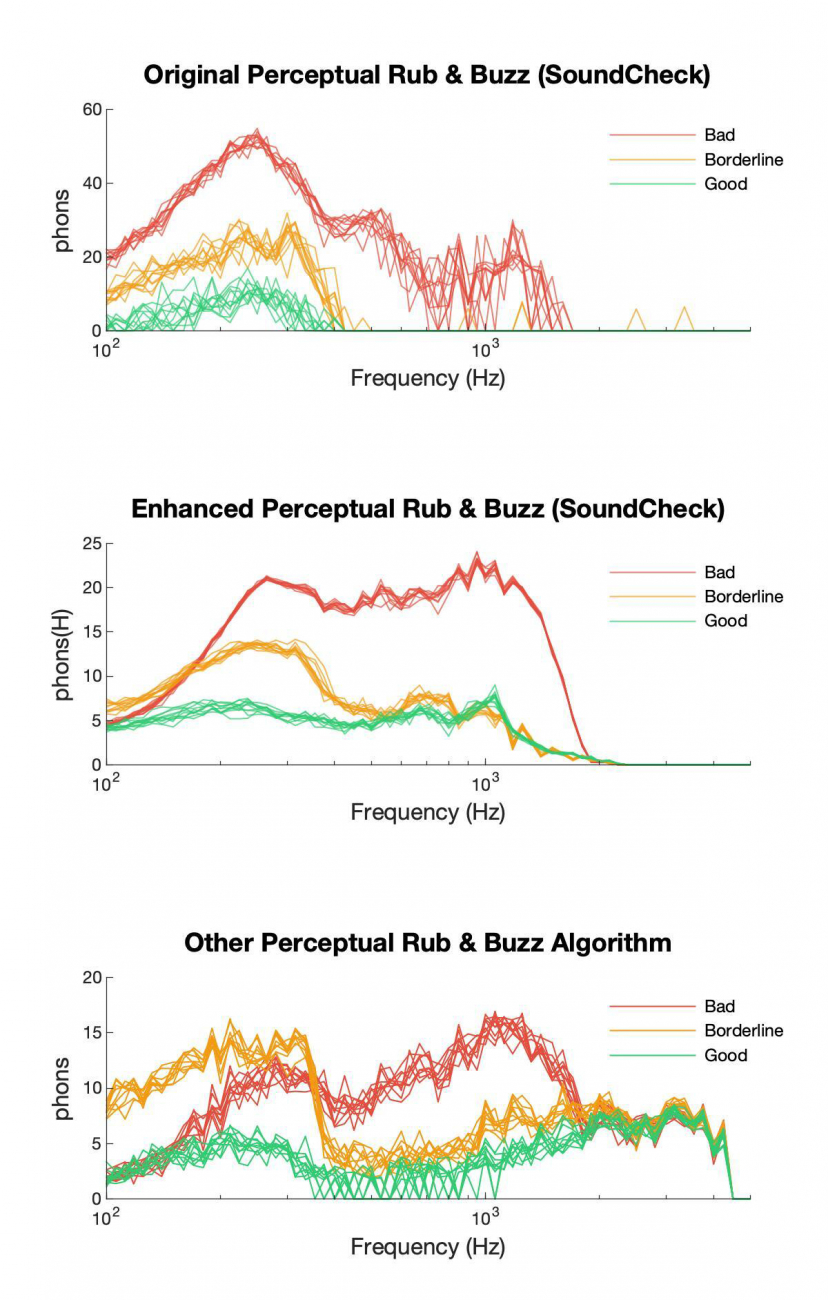 The new enhanced Rub & Buzz algorithm is a reliable and repeatable perceptual method for detecting audible Rub & Buzz faults on the production line. This offers manufactures the option to increase yield by rejecting only those devices with audible distortion defects. Based on the sound psychoacoustic principles used in Listen’s industry-standard 2011 perceptual algorithm, new research offers refinements that improve listener correlation and new, patent-pending, noise reduction technology offers unrivaled repeatability and reliability for end-of-line use. In fact,this algorithm performs like a human ear under normal listening conditions with the background noise of a manufacturing environment! SoundCheck measures perceptual Rub & Buzz using the same stepped sine wave, simultaneously with other end-of-line measurements, enabling this valuable analysis to be added to production line tests with no extension in test time.

Two of SoundCheck’s virtual instruments, the multichannel RTA and the Signal Generator, have been significantly upgraded. The multichannel Real Time Analyzer now includes expanded functionality for real time observation of audio signals. It displays multiple channels simultaneously, and offers real time calculation and display of channel, subtraction, maximum, minimum and power average. Applications for this new feature include real-time observation of active noise cancellation, automotive industry standard 6-microphone array infotainment measurements, validating headphone seal on a test head prior to measurement by comparing left and right earphone response, and more. RTA curves are now seamlessly integrated with SoundCheck’s standard graphs and can be dragged and dropped into any graph for easy comparison to limits and reference curves. This is useful for quick comparisons to reference standards or golden units, tuning automotive infotainment systems, and more.

An overhauled signal generator brings additional functionality and simplified operation, particularly when using wav files. In addition to standard audio stimuli (sine, white noise, pink noise, etc.) with user-selected sampling rates and resolution, it can play any wav file, any memory list file, and any complex waveform created by the stimulus editor. The level can be referenced to Peak, dB or RMS. The signal can be equalized in real time, and custom EQ curves applied, which is useful when using a non-flat source such as a mouth simulator. A specific portion of a waveform can be selected to play, either by selecting a start and stop time in seconds, or by examining the waveform, and signals can play for a fixed duration, a fixed number of times, or in a continuous loop. Outputs from 2 or more signal generators can be mixed on the same channel, and waveforms from multiple signal generators can be synchronized, or delayed for phase control during playback.

The optional POLQA (Perceptual Objective Listening Quality Analysis) module brings Opticom’s POLQA 3 algorithm, implementing the ITU-T P.863 standard, right into SoundCheck, where it can be used for perceptual measurements of speech degradation in communications applications ranging from telephones to smart devices. Used just like any other analysis step in a sequence, this is a fast and cost-effective alternative to a panel of human listeners. In addition to speech degradation measurements, it may also be used to assess the impact of noise reduction algorithms, evaluate bluetooth degradation due to packet loss, or to analyze distortions introduced into the audio path.