The challenges of testing today’s devices 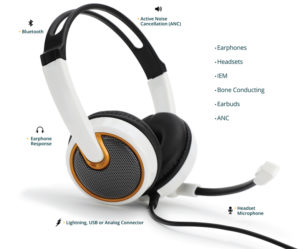 Learn about the latest in headphone test systems and methods from design to EOL Test. Industry experts Steve Temme (Listen, Inc.) and Peter Wulf-Andersen (G.R.A.S.), as well as guest speaker Chris Struck will discuss test equipment (ear couplers, test fixtures, test software and hardware) and demonstrate practical test setups for both R&D and QC headphone testing. It will cover in-ear monitors, Bluetooth, lightning/USB, noise-cancelling and high resolution headphones, in addition to conventional analog headphones. You can even measure your own headphone using our equipment in the hands-on session. Please see the full agenda below.

There is no charge for this one-day seminar and lunch will be provided. Space is limited, so please RSVP today. 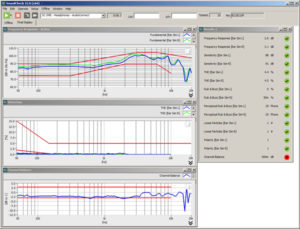 This SoundCheck ONE template sequence contains all the essential steps for basic headphone measurements using SoundCheck ONE and AudioConnectTM. The sequence can be easily customized and saved for specific products by turning individual measurements on and off, and by adjusting settings within each sequence step such as stimulus range and level, tolerance limits, graphical displays, and data saving.
Please note that sequences in SoundCheck ONE cannot have steps added/removed or the layout modified – the full version of SoundCheck is required for this capability.

It is well-known that the frequency response of loudspeakers and headphones has a dramatic impact on sound quality and listener preference, but what role does distortion have on perceived sound quality? To answer this question, five popular headphones with varying degrees of distortion were selected and equalized to the same frequency response. Trained listeners compared them subjectively using music as the test signal, and the distortion of each headphone was measured objectively using a well-known commercial audio test system. The correlation between subjective listener preference and objective distortion measurement is discussed. 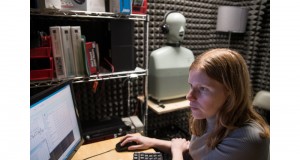 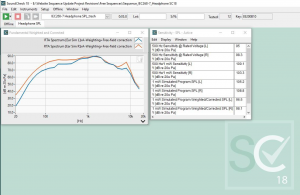 Impedance measurement is often the sole electrical measurement in a battery of QC tests on loudspeakers and headphones. Two test methods are commonly used, single channel and dual channel. Dual Channel measurement offers greater accuracy as both the voltage across the speaker (or headphone) and the reference resistor are measured to calculate the impedance. Single Channel measurement methods are more commonly used on the production line because they only require one channel of a stereo soundcard, which leaves the other free for simultaneous acoustic
tests. They are less accurate, however, due to the test methods making assumptions of constant voltage or constant current. In this paper we discuss a novel electrical circuit that offers similar impedance measurement accuracy compared to complex dual channel measurement methods but using just one channel. This is expected to become popular for high throughput production line measurements where only one channel is available as the second channel of the typical soundcard is being used for simultaneous acoustic tests.

A perceptual method is proposed for measuring harmonic distortion audibility. This method is similar to the CLEAR (Cepstral Loudness Enhanced Algorithm for Rub & buzz) algorithm previously proposed by the authors as a means of detecting audible Rub & Buzz which is an extreme type of distortion[1,2]. Both methods are based on the Perceptual Evaluation of Audio Quality (PEAQ) standard[3]. In the present work, in order to estimate the audibility of regular harmonic distortion, additional psychoacoustic variables are added to the CLEAR algorithm. These variables are then combined using an artificial neural network approach to derive a metric that is indicative of the overall audible harmonic distortion. Experimental results on headphones are presented to justify the accuracy of the model.

A perceptual method is proposed for measuring harmonic distortion audibility. This method is similar to the CLEAR (Cepstral Loudness Enhanced Algorithm for Rub & buzz) algorithm previously proposed by the authors as a means of detecting audible Rub & Buzz which is an extreme type of distortion[1,2]. Both methods are based on the Perceptual Evaluation of Audio Quality (PEAQ) standard[3]. In the present work, in order to estimate the audibility of regular harmonic distortion, additional psychoacoustic variables are added to the CLEAR algorithm. These variables are then combined using an artificial neural network approach to derive a metric that is indicative of the overall audible harmonic distortion. Experimental results on headphones are presented to justify the accuracy of the model.

With the headphone market growing towards $10 billion worldwide, and products across the price spectrum from under a dollar up to thousands, there are many and diverse quality expectations and test requirements. Many audio engineers have moved across from the shrinking loudspeaker industry to the burgeoning headphone marketplace. Although many of the characteristics that make for a good in-room listening experience with a loudspeaker – good frequency response, low distortion, no Rub & Buzz or loose particles, etc. – also apply to headphones, and many of the same test principles apply, there are some significant differences and additional issues associated with headphone measurement that need to be taken into account. These include couplers and associated correction curves, acoustic seal, fixturing and additional tests such as L/R tracking. In this paper we outline the issues that are common to testing all types of headphones as well as those specific to particular types of headphones such as Bluetooth and USB headphone testing, noise-cancelling headphones, and Max SPL measurements to prevent hearing loss.