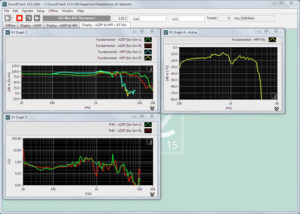 A short 1 kHz tone is pre-pended to the test stimulus which serves as reference tone for resampling and frequency shift operations. Post-processing resampling and frequency shift precisely synchronizes the stimulus and response waveforms prior to analysis. In this case, the HarmonicTrak algorithm is used for frequency response and THD analysis. A2DP frequency response and THD curves are displayed on the first display, followed by A2DP & HFP curves superimposed on a subsequent display. Lastly, the Bluetooth headset’s microphone is tested with HFP and its frequency response is shown on the final display along with the previously collected data.